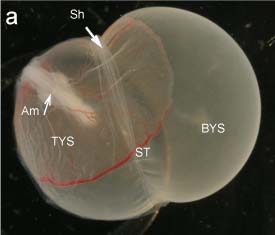 This stunning photo of a tammar wallaby at 18 days gestation shows the vascular (TYS) and non-vascular (BYS) regions of the yolk sac. It will attach to the uterus and, as a yolk sac placenta, support fetal growth until delivery at 26-27 days. All marsupials have a yolk sac placenta. A few develop an additional chorioallantoic placenta (including the wombats). 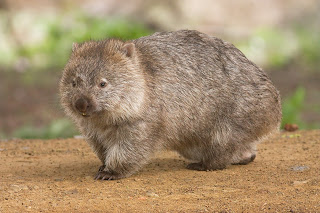 As in placental mammals, the placenta of marsupials is more than an organ of maternal-fetal exchange. It is known to produce several hormones and recent studies extend the list to include growth hormone (GH), prolactin (PRL) and luteinizing hormone (LH). These hormones are expressed in the placentas of other mammals and in some elaborated as placental lactogens and chorionic gonadotropins. As argued by Menzies et al. (2011) this is further evidence of the affinity between placentas of “placental” mammals and marsupials.

Posted by anthony michael carter at 07:00

anthony michael carter
My main interest is placental diversity and the evolution of placental structure and function. However, I shall be posting about vertebrate evolution in general and human evolution in particular.